Diabetes is the result of the pancreas producing too little or no insulin (Type 1 diabetes) or the failure of organs to respond to insulin properly which ultimately leads to beta cell exhaustion and demise (Type 2 diabetes) and is the world’s fastest growing disease. It is estimated by the American Diabetes Association that one person is diagnosed with diabetes every 17 seconds. According to the Centers for Disease Control, one out of every three Americans will have type 2 diabetes by 2050. 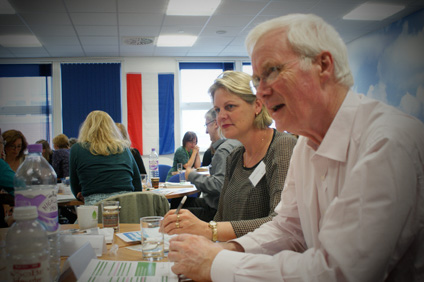 Diabetes manifests when the body’s demands for insulin remain unmet due to autoimmune destruction of the functional pancreatic beta cells (Type 1) or insensitivity to insulin’s effects (Type 2) which ultimately leads to deterioration of beta cell mass. Accordingly, a fundamental objective in diabetes research has been to replenish these cells. Indeed, the success of islet transplantation from cadaver donors validates that diabetes can be treated through replenishing deficient beta cells and serves as a proof-of-concept that stem cell-derived beta- like cells could function as an abundant and quality-controlled source for this purpose. RMS has developed a patented process that converts human induced pluripotent stem cells (hiPSC) into functioning islet-like cells and avoids the ethical concerns of using embryonic material that other approaches may use.

In addition to their potential use in transplantation to treat diabetes, human beta cells are needed to test candidate therapies for preclinical efficacy and toxicity, which today relies on traditional and inadequate animal and cadaveric tissue models. The recent introduction of using hiPSC-derived differentiated cells for testing candidate compounds in preclinical efficacy and toxicity studies has led to the commercial availability of several differentiated human cell types. For example, hiPSC-derived cardiomyocytes, endothelial cells, hepatocytes, neurons, astrocytes, hematopoietic, cardiac progenitor cells and skeletal myoblasts are just some of the cell available from early vendors in this field. However, the conspicuous absence of a islet cell products remain as a significant barrier to determining whether candidate therapies exhibit islet cell toxicity or promote beta cell function. RMS plans to be a significant supplier of such a product and allow pharmaceutical companies in the diabetic drug discovery space, as well as those testing secondary effects of other drugs, to accurately assess the potential side effects and utility of their products in-development.

Under current conditions, the ultimate target market is expanding exponentially, thus creating a need for innovative and groundbreaking treatments in the field of pancreatic cells derived from human pluripotent stem cells research. RMS is strategically positioned to pursue these innovations and make the necessary breakthroughs to enhance the lives of those patients with diabetes.

Demographics are shifting rapidly toward a continued increase in the prevalence of diabetes cases worldwide. An estimated 415 million people currently live with diabetes. In World Health Organization projections, the number is expected to grow to 642 million by 2040. Diabetes is currently experiencing unprecedented growth in the United States with over 30.3 million people currently affected, corresponding to nearly 10% of the population. Other high growth markets include China and India, which have over 114 million and 80 million diabetes cases, respectively. Projections indicate that the number of cases will double within the next 20 years and the CDC projects that 1 in 3 Americans will have diabetes by 2050. This increased worldwide prevalence further illustrates the importance of the RMS breakthroughs on a global scale and the sheer number of lives that can be positively impacted through RMS products and research in the future.

According to the National Institutes of Health testing, 35 percent of U.S. adults ages 20 years or older had pre-diabetes. Applying this percentage to the entire U.S. population yields an estimated 84 million American adults ages 20 years or older with pre-diabetes who are at a significantly higher risk of developing diabetes in the future. Additional growth of risk factors in the U.S. will lead to further expansion of the target market and increase the potential of a high demand for RMS technology.

In many diabetes cases, there is a lack of sufficient treatment options, and millions worldwide are suffering as a result. In a study conducted by the International Diabetes Foundation, it was estimated that one person is dying from diabetes every six seconds. With the growing prevalence of diabetes and the lack of treatment, the World Health Organization projects that these number of deaths will double by the year 2030. RMS seeks to help to reverse this alarming trend by helping to develop treatment options that provide an effective treatment of the disease, while also being accessible to those in need.

Costs of treatment are also climbing, outpacing inflation for the past decade. Findings by the American Diabetes Association show that the total direct and indirect costs of diabetes to the United States were $245 billion in 2012 alone, an astounding 41% increase in costs in a five year period. Studies conducted by the World Health Organization have demonstrated an even more profound effect; showing worldwide spending was nearly $825 billion. Currently, over 12 percent of global healthcare expenditures are connected to diabetes. With the introduction of RMS assisted breakthroughs, these costs can potentially be reduced significantly each year, benefiting patients, drug manufacturers and society as a whole.

Replacing beta cells that are destroyed or dysfunctional in insulin-dependent diabetic patients with beta cells from another source represents a therapeutic strategy to restore normoglycemia.  Unfortunately, islets obtained from deceased human donors are currently the only available source of replacement cells and are far too scarce to meet the needs of all patients with diabetes, also requiring patients to take significant immunosuppressant drugs which have adverse side effects and are extremely expensive due to their limited supply.  In response to this unmet clinical need, Regenerative Medical Solutions, Inc. (RMS) has developed a proprietary protocol to differentiate induced pluripotent stem cells (iPSC) into pancreatic islet-like clusters (ILC) containing abundant glucose-responsive beta-like cells. RMS’s ILC product represents a significant advance in the field, and its cells could potentially restore glycemic control to patients with insulin-requiring Type 1 or Type 2 diabetes within a timeframe similar to a transplant of donor-derived human islets.

Use of autologous cells would be expected to not be susceptible to immunological rejection, because we don’t reject “self”, but we do attack “foreign” cells without immunosuppression or immunoprotection. Patient-specific, customized autologous iPSC-derived islet-like clusters would not be seen as foreign and would not be rejected; however additional precautions could be required in T1D patients. This approach could serve as an initial first in man trial to garner valuable data.

For allogeneic cells, where there is a “one size fits all” cell, it would be necessary to either genetically modify cells to escape rejection, coat them to make them unrecognizable by the immune system, put them in a immunoprotective device or immunosuppress the recipient. We would propose to generate a Universal Cell that can be used for all patients and would evade the immune system and simultaneously carry a suicide gene switch, which could be activated in the case of cancer. Having both features would be a unique and highly valuable cell line.

Triple maintenance immunosuppression is well tolerated by patients with type 1, type 2 or other forms of diabetes. Patients with diabetes are not different than the non-diabetic population in their tolerance of standard, routine immunosuppression which is used in all types of organ transplants. It is much safer and less risky in 2020 than it used to be in the 1980s and early 1990’s. It is also much more effective. Rejection rates are generally less than 10-15%.

Type 2 diabetes is characterized by a relative deficiency of beta cells and insulin production that doesn’t meet the demands of the patient and are estimated to be 90 percent of cases worldwide.

In the past, pancreas transplantation was not commonly offered to patients with T2D because it was thought that the metabolic state involving insulin resistance and high insulin requirements could not be overcome by the insulin output from the graft resulting in a lower success rate as defined by the achievement of insulin independence. However, it became evident first through anecdotal experiences and later through reports from single centers that insulin independence could be achieved in many insulin-dependent T2D patients despite high insulin requirements and measurable insulin resistance.

Based on these data in pancreas transplantation, RMS proposes to use patient-specific human induced pluripotent stem cell-derived islets for transplantation. Because there is no autoimmunity in T2D, patient-specific cells would not be vulnerable to autoimmune attack. And, simultaneously would not be vulnerable to rejection because they are derived from the patient themselves.  Induced pluripotent stem cells would be generated in the lab from blood samples taken from the patient by reprogramming them to induced pluripotent stem cells using technology licensed from Academia Japan. Then we would convert them into islets and transplant them. For the transplant procedure, we would infuse cells into the liver or omentum, which are proven and tested sites for cadaver islets, sites which we know work.

By using patient specific cells and transplanting them using a proven technique into T2D patients, we set ourselves up for success in initially a small scale clinical trial, but ultimately, of course, there are many, many T2D patients that could benefit from this beta cell replacement therapy which would be much safer than the surgery involved in pancreas transplantation and would not require life-long immunosuppression.