In the future, pancreatic stem cells will be capable of making insulin-producing tissue for transplant purposes. These will be “custom grown” using the patient’s own cells, reducing rejection risk to almost nil.

Utilizing ProgenMix™, pancreatic cells can be cultivated more efficiently and therefore become more effective tools in research. ProgenMix™ works with multiple iPS and embryonic stem cell lines and is able to deliver robust and consistent results, due to the fact that it is chemically defined, leading to less variability from lot to lot.

The following graphics illustrate the superiority of the RMS protocol relative to other media published in academia and in industry. ProgenMix™ provides a highly differentiated product that allows scientists and researchers to improve both their effectiveness and efficiency, thus reducing costs by saving valuable time and money. 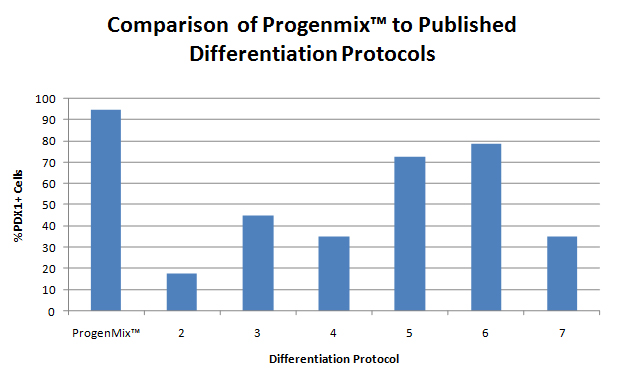 This figure compares the output of PDX1+ cells derived from human pluripotent stem cells using the ProgenMix™ pancreatic differentiation protocol compared to results in the literature obtained using several other published protocols. PDX1 is a pancreatic progenitor marker gene that is expressed in pancreatic progenitor cells and insulin-producing beta cells. The PDX1+ cells derived by the RMS protocol express other important gene and protein markers of pancreatic progenitor cells as well, such as SOX9 and Nkx6.1. These cells can be isolated to better than 95% purity from undifferentiated stem cells via a 4-stage culture protocol. Compared to other published protocols (#2-7), ProgenMix™ is more efficient in that it yields a higher purity of pancreatic progenitor cells. This allows researchers to generate better data and be more effective in their research. This model could be used to test candidate drugs for stimulating beta cell formation and regeneration. 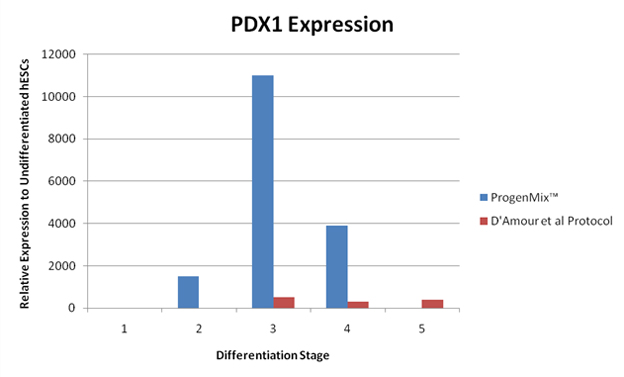 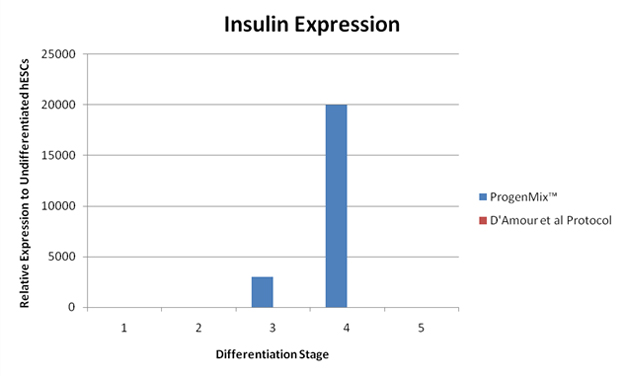